While installing Parrot Home 4.4 the install fails on installing grub. The system is VM inside Proxmox 5.3 with 8GB RAM, 32GB SATA.

I had this same problem with Kali, it’s workaround was to not use the repository mirrors. This made me suspect that the network was being lost. By forking a background xterm in the Live desktop to popup overtop of the graphical installer I was able to find that the installer borks NetworkManager. The desktop starts with a working network but when the installer does it’s test for networking, the network is lost and does not recover. This is a bug in the installer.

This is my workaround.

Boot to Live desktop
Start an xterm
Run this command in the xterm
sleep 120; xterm
Click the menu button in the bottom left
Search for Install
Click “Install Parrot” in the top right of the menu
Proceed with the normal install until you are prompted for a user name

If the xterm pops up before you get to that step, select the first xterm using the app bar and run
Ctrl-c to kill the second xterm
sleep 120; xterm
Click on the GUI installer to bring it to focus

When you are at the step to setup a user name, use the xterm to fix the network.
Run these commands
sudo su
killall NetworkManager
killall dhclient
dhclient
ping google.com # make sure you have network again.
sleep 120; xterm
Click on the GUI installer to bring it to focus

Retry the grub install
The rest of the install should work properly now.

i dont think if you follow all the instruction for parrot regarding pre install/boot changes you need to make that this is necessary. Ive never had to do anything remotely related to this and especially not anything Id have to really change in the installer, ultra super duper especially change the mirror!

I just reproduced the problem in VMware Workstation running on Windows 10.

The installer crashes NetworkManager, it is still running but the network is down. 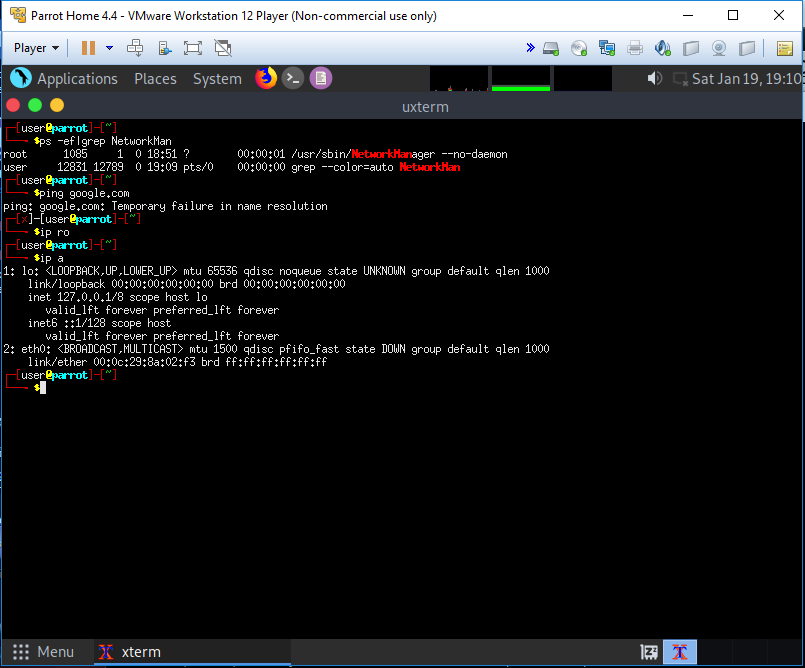 What are the install/boot changes? Is there link?

This has all of the release notes and important news updates we have ever made. You may have to look through a few versions to accurately and entirely see all installer changelogs