I wanted to try other GUI for parrot os because i’ve switched to parrot os as my main so was looking for a better GUI
well KDE and mate are good but there were some bugs maybe deepin or any good GUI i can use ?
can i use any other GUI if so then how to install it ?

I have used Deepin. It’s pretty but not very low on resources…

Xfce was available on Parrot last I checked. Try it out:

You can use any desktop environment or window manager you like. Follow links specific to your preference on Debain. You will find it’s the same process. I’m working on building Parrot i3 so I can push it on the team

awesome! I used to use XFCE all the time (been a couple years) and I am definitely going to check it out and will let you know what I think (when I get back in town).

I am excited to check it out

And about Deepin… there are some questions about it.

yeah i believe there are some weird activities from the application.
Can’t say it is not good. It is smooth and i feel it is better in some case (ofc you can see everything is not built from scratch. I do feel like i can see calamares installer in deepin installer for example).

I definitely plan on looking into xfce,it seems interesting.
but is anyone able to explain what the major differences between xfce,mate,and kde are?

i ask,because,at the moment,i have mate and kde applications somehow merged together after the last update.that being unexpected,i worry about the overall size of the os.

okay…
So if i were to install xfce,how would i go about removing mate and or this kde i now show in the applications menu…?
i wouldn’t want remnants of all three using up system space… 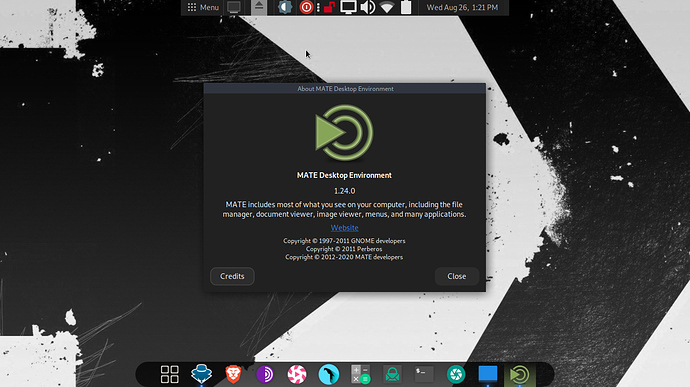 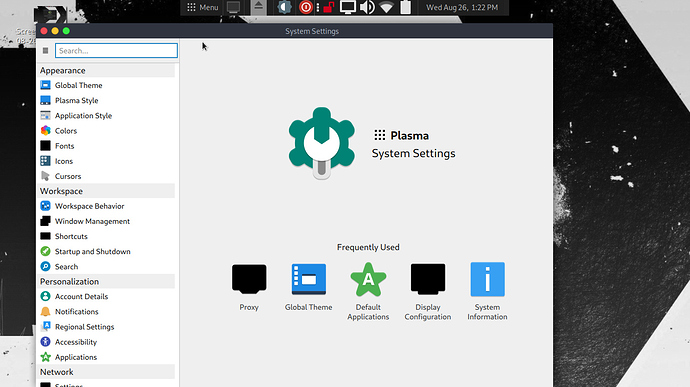 Use apt list -ai | grep to search for mate/kde/xfce packages and apt purge all of them. Make sure to have network-manager still installed if you use wifi.

I just built this from Parrot home KDE edition. Parrot-i3

still a work in progress 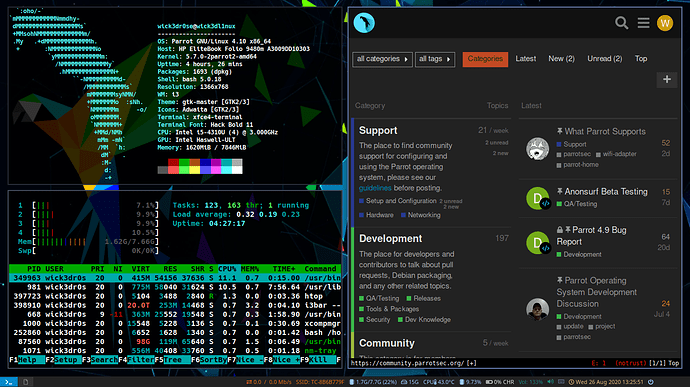 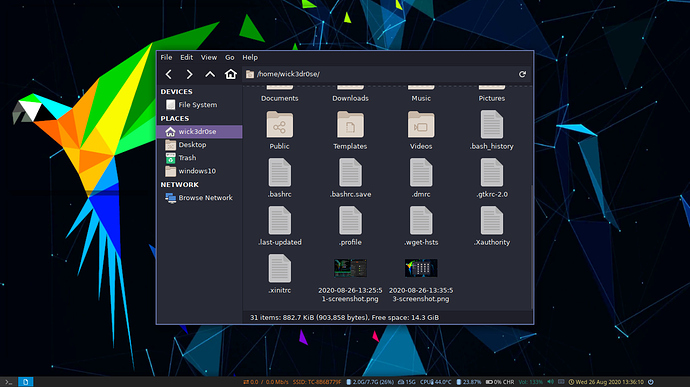 Definitely seems like something i should take my time with,don’t want to make a mess of it…
i still have no clue how kde was added to the mate version i downloaded originally…?

I’ve seen it on another thread. Seems an unusual event that happened to several people. My installation had a mix of XFCE, KDE & mate. KDE is my favorite desktop enviornment because it’s constantly updated and maintained. XFCE is a little behind and KDE seems to run as minimally as XFCE does now. I don’t use the other desktop enviornments. i3 is a window manager so you hotkey commands all over your keyboard to control your system. In my mind it’s more useful and productive. If you prefer to use a lot of graphical interfaces though it can be counter productive

Thanks for the feedback…

when it comes to tiling window managers there are tons of option like i3, xmonad, bspwm, awesome and many more. they basically handles how the windows are shown and tiles it accordingly.
you can implement it on any DE ,

i tried these GUI’s but in the end cinnamon with parrot OS is best i encountered no bugs using it so far
though in Xfce and KDE my laptop pad wasn’t working properly had some issues ,pad suddenly stops working

i’m attempting this now,do you have any idea why i would get this response,and how to remedy it?

And really,this topic deserves it’s own post,potentially from the developers with the resolution you’ve provided here.many won’t have a clue most likely,so a brief tutorial would be helpful.
I’m certain that the less experienced users of the platform would appreciate that proactive approach,definitely wouldn’t hurt with improving user loyalty…

though what you’ve shared hasn’t worked for me,i’m hoping someone can help with that…