How to install pyrit in parrots

How to install pyrit in parrots

pyrit was removed from server because of python2 removal.

Are you trying to install Linset? Try this:

first of all make sure you have:

You need to install git before you can use Pyrit’s repository; most Linux distributions provide a package for that. Do the initial clone from git like this:

This will create a new directory called ‘Pyrit’ that holds all of Pyrit’s latest source-code. Execute git pull inside that directory to keep track of changes, you may need to recompile for changes to take effect.

Switch to the main module’s directory. We need to install some python dependencies first, for which we will use the pip command, we use Python’s distutils to compile and install the code:

If everything went well and no errors are thrown at you, use distutils again to install Pyrit:

I tried Wifite last night for the first time and saw it was complaining about missing Pyrit.

I was able to get Pyrit installed, or at least Wifite isn’t complaining about it missing. See screenshot, I don’t know what I’m doing, but I’m attacking my own router.

I had to manually install Python2’s pip.

Make sure the libpython2-dev package is installed in Parrot.

Then you install the relevant Python2 packages (cython might not be needed).

The rest is as the Pyrit GitHub page says

And if built successfully, run 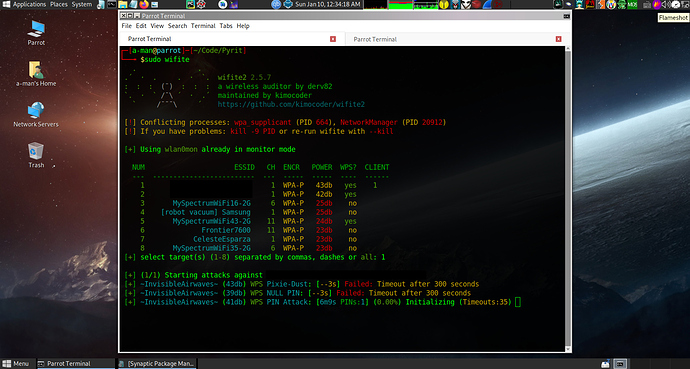 Understood. Too bad some tools haven’t been ported from 2 to 3 (yet). I imagine professionals use hashcat or something else against the WPA handshake capture file.

My nice Alfa AWUS036NH appears to be malfunctioning, so I bought a cheap Panda Wireless PAU06 for $13 (USD) this morning, which is supposed to support monitor mode and packet injection.

How to Crack WPA & WPA2 Wi-Fi Passwords with Pyrit

Pyrit is one of the most powerful WPA/WPA2 cracking tools in a hacker's arsenal, with the ability to benchmark a computer's CPU speeds, analyze capture files for crackable handshakes, and even tap into GPU password-cracking power. To demonstrate how...

I imagine professionals use hashcat or something else against the WPA handshake capture file.

Well yeah. I meant hashcat is much faster than other software. The problem is hardware. But hashcat stills support use normal CPU brute as far as i remember. Flag --force.
Anyhow i played with the “bruteforce hash” script before and well the benchmark of py script and software like John, Hashcat is a huge difference. And that was just cpu only.
For wifite(2), it uses not only pyrit but aircrack-ng to crack wpa so well, why should we focus on Pyrit. Aircrack-ng should cover all.