I am using Parrot Security OS as my primary OS and I am facing laggy experience while using it.I am not saying that it is a bad OS or anything like that I know that is one of the best and I am only using it for my Web Development Work and Penetration Testing and I want you to know that I am only facing lag when I use the inbuilt VS Codium and Web Browsers. I just want to know the minimum specs I need to do these stuff without any lag and yes the last part that I have Dual Booted Parrot OS with Windows 10 out of 1TB HDD , 50 Gigabytes is allocated to Parrot OS .The current specs of my laptop is:

Do I need to upgrade my Hardware or It will work with some Software changes ?

The minimum spec is for running the system only. Different applications need different system requirements. Your system should be enough to use. Need no lag? i’m afraid you have to get better system or a PC. The minimum specs is a myth and sometime it is not true.
You can try disable some services to speed your system up. On security version there are some apps enable them up automatically after the upgrade and we are fixing it during the package maintaining project.

Can you please tell me what services do you think are not necessary and needed to be stopped?I only wanted to do programming and penetration testing on this OS.

Can you please tell me what services do you think are not necessary and needed to be stopped?

How can i know which services you need and which you don’t need? it is up to you. Just use systemd commands to list and disable.

Also how to can change my current MATE desktop enviorment to XFCE . I think it will help my Laptop to speed up as XFCE is light wieght 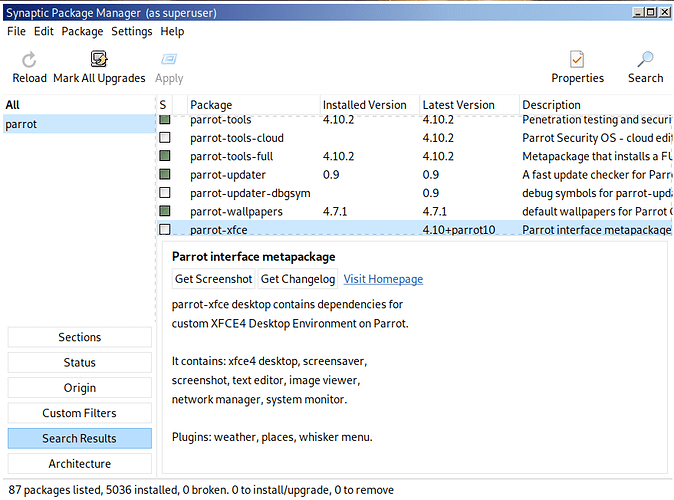 how to completely remove the Mate DE ?

But I’d wait until XFCE4 is installed, then choose it as your desktop at login before removing Mate.

For me, I’d just backup all documents and install the official Parrot XFCE Home 4.10, then add all the pentest and programming packages you want from the repository. That way you start out without a bunch of services you don’t need running in the background.

We now officially support the XFCE Desktop Environment. We will improve it in later months using the feedback from our users, and we want to provide it as a valid alternative to MATE and KDE.

you can download the XFCE image from here https://download.parrot.sh/parrot/iso/4.10

It is better to have fresh installation of xfce 4.11 release.

How can I install pentesting tools in parrot os home edition??I have installed parrot xfce 4.10 amd64.

Launch Synaptic Package Manager and search for “Parrot-Meta” to find the metapackages. Or you can search one-by-one and install the tools you know or are interested in. 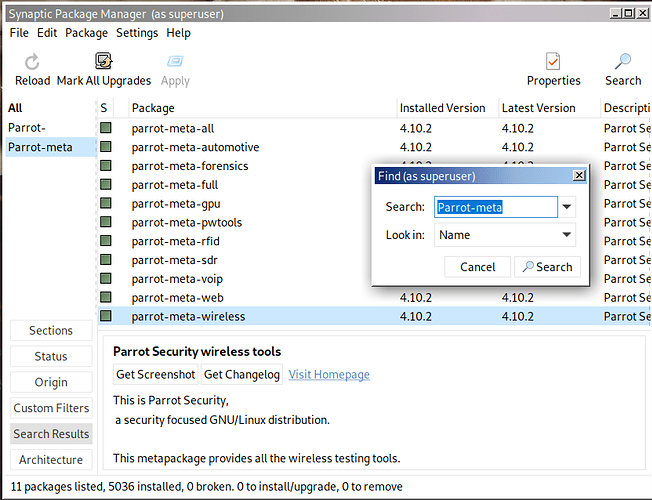 Thanks!
I will check it

Is there a reason why you want Microsoft telemetry on your built for security, anonymity, and pentesting distro? You can download the VS Code icon and replace VS Codium’s icon with it if you want Rohit.

VSCodium is a clone of Microsoft's popular Visual Studio Code editor. It's identical to VS Code but it doesn't track your usage data.

ok bro…Now I get it Thanks for the help though!Hope we can connect somewhere on social media…HAHA…by which I will get instant help from you!

ok bro…Now I get it Thanks for the help though!Hope we can connect somewhere on social media…HAHA…by which I will get instant help from you!

No problem. For the foreseeable future, until I get a Covid-19 vaccine, I’ll be visiting the Parrot Community forum several times a day. I’m not a Linux Guru yet, but I love Parrot and have an extensive background in technical support. For me, assisting others to solve issues is fun.

Brother I have noticed that whenever I do Web Developement I have to open firefox alongside with the vs codium , only then I see the lag in my laptop. Other wise it works perfectly fine for me and now I am using parrot os xfce 4.11 home but web development is one of the major things I do in my daily routine. Please help me solving the lag .

The lag while using Firefox has been brought up a number of times and even I have experienced it. If you run the command

you will probably see Firefox up on top using the most CPU and memory.

three times: once with no extra programs running, then after launching vscodium, then when vscodium and Firefox were running (see three results below).

Are you using a swap partition or swap file? Does running htop show Firefox is using a lot of your i3 CPU? Maybe disabling some of the included Firefox extensions would lower the lag.

It was mainly the CPU, not memory that I was experiencing lag from, on an older i5 cpu. I ended up installing “stacer” and disabling a few services I didn’t need (systemctl can do the same thing, but stacer makes it easier). After carefully disabling some services that I knew wouldn’t crap up my system, I exited stacer as that program takes up a lot of resources itself. 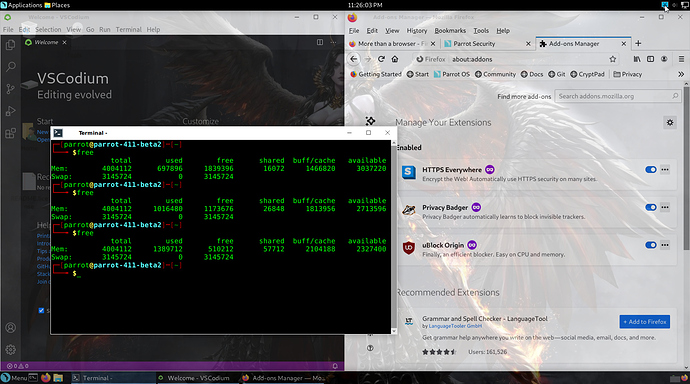 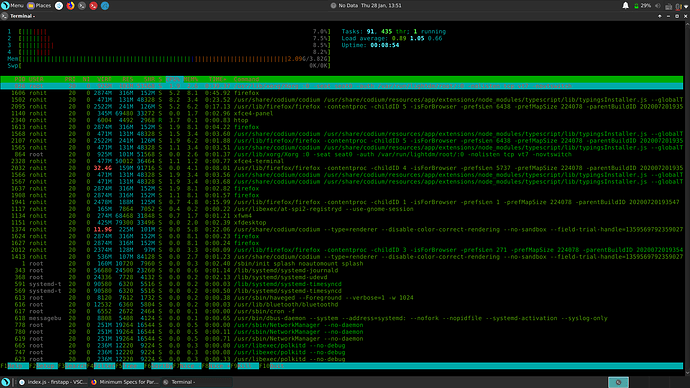