The automatic security updater popped up and I did the update but now the Flightgear package is missing as if its been removed from the repo. Flightgear-data-base and other dependecies are there but the main pachacge "Flightgear is gone and it is now broke after the update. I am Running Parrot Security 4.7 KDE
I was happy to see a security OS with the sim I spend much time on that was up to date with Flightgear 2019.1. If someone could look into this or help me out I would greatly appreciate it. Thanks in advance.

I just checked and the packages still exists in the repo 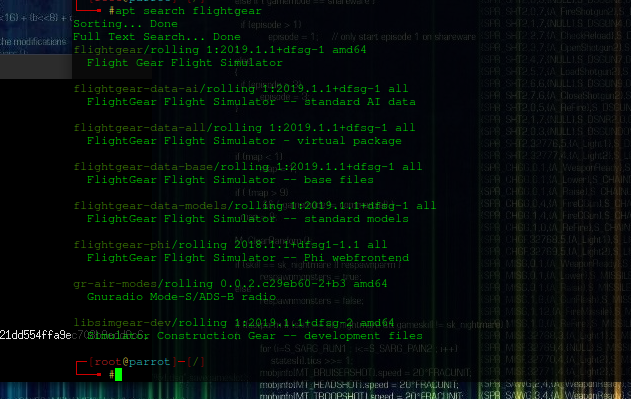 Heres what you could try:

OK I tried that but the package “flightear” is still missing. I’m not sure why. I looked under repositories in Synaptic Package Manager and it just says rrolling under each one so I don’t know where the packages are coming from on the Debian side.

I did find this if that means anything for Parrot Security. https://tracker.debian.org/pkg/flightgear

Thanks for the quick responce,
Steve

Is there a way to stop packages from being unistalled just because they were removed from the repo. I’ve never ran into this with and distro that I remember. Its a bit intrusive to remove a program I’ve installed without any notice. This was done by the security update manager that comes with Parrot Security. In the terminal window I would at least hope for it to ask me if I want to remove a program. I really don’t want to have to go back to the U know who based distros. I like how Parrot comes pre configured for security. Can anyone tell me if this is a issue that often happens? I would like to see a way that Parrot devs can resolve this. I assume it is caused by a Debian freakout. I’ve used Flightgear 2019.1.1 very often since it came out. its gained enough popularity that DARPA has an vent coming out using it with the F-15 my friend and a core dev for Flightgear devoloped. I know some users of this disro may not be so interested in a problem regarding a flight sim but such a well used program should not be neglected. I’m not sure if I should be knocking on Debian’s door or here though. Don’t take any of this negative. I’m just expressing my concerns.