I am rather new to Linux and Parrot, but I am already a Parrot fan !

Here is my support post to the community please

I am running Parrot on on a dual-boot Win 10 laptop, having Windows installed on the SSD, and I have install Parrot on the other HD, with partitions for both Windows and Parrot.

The installation went smoothly but I couldn’t get a Swap partition created, don’t know why.

Hello!
Answering to your question:

Many thanks for your response - sorry for late message, but just saw yesterday that my topic got approved and responded.

So, I tried the encryption during installation and upon boot, grub rescue prompt appeared. So, That means I have to reinstall right? If so, will that affect my other Linux installations? I have two for a total of three on the HDD. I barely use one, but the other one is my “daily driver”…but not for long since I have Parrot now. Please advise.

grub rescue prompt appeared. So, That means I have to reinstall right?

You can encrypt your home and swap partition post install. I use parted, fdisk or cfdisk… Regardless of your application you just need to create a linux-swap file system partiton half to equal your RAM typically turn swap on and initialize it. You can access your windows partition by creating a folder like ‘windows10’ in /mnt and mounting it while you’re at it as well

Check your BIOS boot order make sure Secure Boot and Fast Boot are off. Try to boot via your other Linux installations or look for Parrot itself. If GRUB is an option you aren’t specifically booting into currently then try it. It’s a common issue when multibooting. Grub sucks honestly… Best advice is to only have one efi boot file and use it for all of your operating systems. I created it with Windows 512MB and share it with all 4 of my distros on one 180GB SSD.

Thanks for the input. I am seeing this after the fact. I reinstalled in a Luks partition. I dove head first into Linux after WIN 10 crashed on me and I was studying for a Cisco cert. Long story short; I formatted and installed a distro that would run GNS3 and have not looked back since. That was last year. I have forgotten about Windows all together. I have since gotten comfortable to partitioning and dual booting various distros, all which funny enough seemed daunting when I was in the Microsoft ecosystem. It also helps that I use Macs a lot, and navigation is somewhat similar

I am getting better at the CLI, just have to get some Linux + material so I can gain some level of mastery on the OS and it’s working.

I had to do a reinstall. The prompt appears for about two seconds, then proceeds to list all bootable installations. And yes, secure boot is off. I don’t have Windows anymore.

I’m not familiar with GNS3. I’m an avid Arch Linux user but always had a liking for Debian based distros. It can seem very daunting when you’re taught from the beginning to use only graphical interfaces; In the end it’s WIndow’s terrible management and coding that causes more frustrating experiences than any issue Linux has ever game me. The beautiful part about Linux (If you like to tinker with stuff) is that you learn how to build your DE/WM or pick up some knowledge about the components that work them. Parrot seems to be an amazing OS. This is my 2nd day working with it. I plan to learn as much as I can about pen testing and security. Kali and Parrot both being built on Debian make this a great distro to learn on as well. You should be able to force boot to grub or whichever one you prefer. Use efibootmgr to edit your boot order first, if that doesn’t work just delete the other entries. 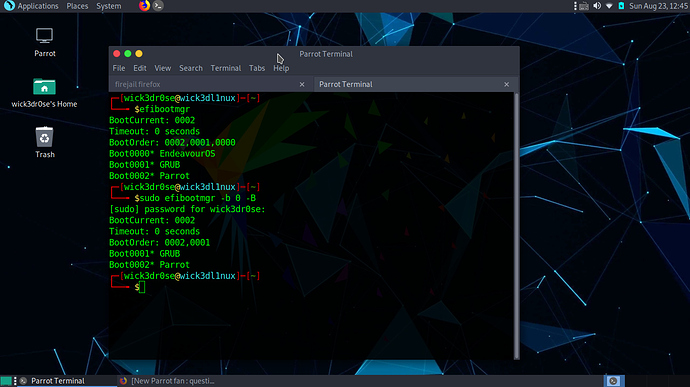 That screenshot was helpful. I just need to figure out what the operators are doing. I heard Arch Linux has a steep installation / learning curve. I also heard lots of good things about it. GNS3 is a network engineer’s best friend as it emulates actual devices, and aids in the creation of simulated topologies, which can later be deployed into production networks. It runs good on Debian so I’m sure it will work with Parrot for me.

For Reference:
You can always add full disk encryption post-install, though it is more difficult.

You would have to copy the data from your drive to some external storage, wipe the original drive clean and create an encrypted partition layout.
Then you would have to move the data back into the new layout and edit the respective files to point to the new partitions, from the top of my head /etc/fstab and /etc/crypttab.
At last recreate grub/initramfs files via live-USB and everything should work just fine.

I mentioned this because its one of the ways to transfer your OS to ZFS on Root (encrypted),
which i just wrote a small Guide for.
Just replace the clean installation files with your own OS, then continue as described.