"No bootable device" error after install

I have an Acer notebook laptop with UEFI, that makes it difficult to install linux (I had to do some work arounds to get Ubuntu to install correctly in the past), and it now has no operating system. I thought I would installing Parrot on the laptop, and the installation was successful without any hiccups, grub installed succesfully, but when I rebooted and removed the installation USB, the laptop says there is no bootable device.

I booted back into the live USB on the laptop, opened up GParted, and I do have a fat32 boot, esp partition as well as swap, and the ext4 partition, so it looks like the installation did in fact work correctly. Why is the laptop unable to boot?

What method did you use to install Parrot? Standard Installer

Configured to multiboot with other systems? NO

Did you check the flags on the partitions? Specifically speaking on the esp partition? Do you have a legacy boot (biosgrub) partition after your esp?

Here’s a screenshot of my partitions. 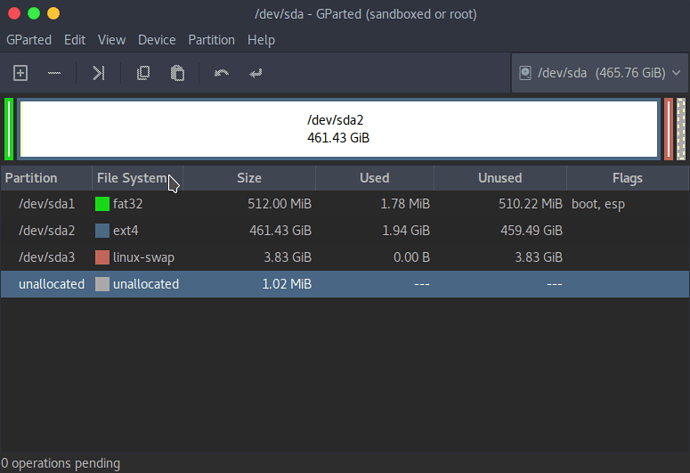 Screenshot%20at%202018-10-30%2003-31-40775×532 34.2 KB
It looks like I don’t have a boot partition, but it’s included with the esp partition, I guess? I’m somewhat new to installing linux, and have been having issues with this Acer Notebook. I don’t think my laptop supports legacy boot, just UEFI. At least I haven’t been able to find a legacy boot option in the BIOS, and I don’t have the option when I boot from a live USB nor when I installed Parrot. Right now I’m just using the live USB to check the partitions on the laptop.
Nico_Paul (Nico Paul) October 30, 2018, 4:45am #4

You definetly need to set all of the paramters that are true to true under the flags selection if you left click on the partition, it can depend on what you are actually running your system (and their interactions with other OS maybe installed) in regards for the having both efi boot and biosgrub partitions. Also I hear some different thoughts on this but i personally do) have a tiny unallocated portion of 1mb or so in between all of those and before and the est of the disk thats left at that point after taking double swap (for systems between 16-32gb the more is not better once you get larger systems) make sure your swap is set to swapon, and both update and configure your bios that came with it and last nut mit least verify your checksum along with etcher image writer that you downloaded from the parrot 4.2.2 or maybe 4.3 at the moment it comes out and then plug boot play with the live system or/and install

Had this error before. On start up press the button that brings you to a one time boot option (F12 for me) and then you will be able to select your OS. Not perfect but its a workaround.

I tried your trick, but oddly enough F12 no longer brings up my boot options like it did before.

Okay I’ll see if I can get it to work. Also, isn’t fat32 a Windows format? Why would Parrot OS create a fat32 partition when there isn’t any Windows operating system on the computer?

Fat is universal, and you may have different needs based on hdd and bios/uefi so i really only know what my system works with but my bios boot button is delete because its a gigabyte motherboard (not recommending gigabyte linux combination, it takes a little bit more work and gigabyte sucks at communicating and updating anyone anywhere although still better than MSI imop)

you may have accedentally somehow corrupted the grub install, Reinstalling grub may fix the issue.