[SUGGESTION] Switch to Zsh over Bash shell by default

Bash is the default shell in Parrot OS. It’s understandable as it’s the most used shell that is built-in in a lot of distributions. I would like to suggest however a possibility to switch to zsh over bash shell. Bash is very good but zsh is even better and more beneficial + it’s fully compatible with the bash POSIX standard. It’s more flexible and allows many customizations. On top of that, there already exists a lot of very useful plugins to make terminal work even more efficient. I do realize that we can set up zsh manually, but I believe making it default in Parrot with official support from developers would be more beneficial in a long run. Zsh is very advanced and has various advantages over bash but there’s no reason for me to mention them, as everyone probably knows that. I’m talking about zsh itself without any frameworks like OhMyZsh as they’re too heavy for the base installation. I think it would be a good change.

IDK if your idea came from Kali changelog. Here is zsh you might want without OhMyZsh 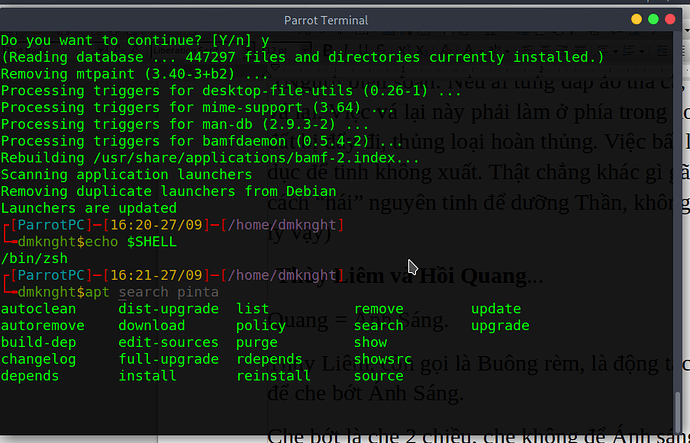 Yes, I did hear that Kali is going to make this change. I like Parrot a lot and I use it daily. As easy as it is to setup Zsh manually I thought that maybe it would be good for the project in general. Zsh is way better than Bash even with just default configuration. I understand if the team doesn’t want to follow the suit though. it’s still a project that wants to introduce the original ideas. There’s always a possibility to prepare a Zsh configuration for Parrot to download for example via APT. This Zsh conf on the screenshot looks pretty good.

This Zsh conf on the screenshot looks pretty good.

There is a custom packaged plugin of zsh. It is good but latest version is having slow performance at start and exit.
Not only zsh. Fish shell is having customized prompt and some configs in profile (i made it and i don’t remember. Fish is having limitations)

I did hear that Kali is going to make this change

I’m waiting for the “Parrot copied it from Kali” LuL.

I’m waiting for the “Parrot copied it from Kali” LuL.

Well, that’s actually true that part of the community would probably react this way

Honestly, it’s just that I usually prefer official developer supported packages and configs as third party stuff rarely pay attention to actual performance. I think it’s easier to achieve trying to build something in and doing some tweaks. I do realize how a possible switch would look like, which would be a matter of changing the profile to zsh, that’s why there’s probably no actual reason to switch to Zsh, but keep this possibility in mind

Fish is very good but the lack of compatibility with Bash makes it out of question.

Fish is very good but the lack of compatibility with Bash makes it out of question.

No. the problem is usability. It doesn’t support suggestions for apt and so on.

which would be a matter of changing the profile to zsh

default shell is still bash. Some plugins and configurations will be installed in the system.

Last year, Parrot released a version with nginx and removed apache. some “Hackers” complained about they don’t know how to start a fucking nginx server. Well… so many skids are using Parrot. And it is better to let it be like that instead of changing everything.

Well, I get your point. Some people don’t like to step out of their comfort zone, as this might mean that they will have to learn new things and they just don’t want to. In any case, Parrot is on the right track and good luck with future development.

Quick question - if you follow the kali blog post on how to install zsh, with syntax highlighting and also follow how to default it as your shell - would it then be the same on parrot as kali?

Would this in fact mirror the Kali experience?

It works for any debian based distro. Ofc the skel is custom thing (maybe) and it must be done manually. On fresh install system, it doesn’t need.

Dont we need to copy the config file that the kali team cooked up to make the experience mirror what is in Kali?