Hey Everyone! If you can’t tell by my name, I am new to Parrot OS and linux as well. I could not bare windows OS anymore. So, I installed Parrot (full install, no dual boot) because I liked the videos I was seeing about all that you can do with Parrot Security, not just for pentesting, but programming as well. In short, since I’m new to all of this (2 days in)…

If anyone could please help with this I would be so appreciative. I have tried so many keyboard shortcuts, but nothing seems to work and some even made the situation worse. I’ve even tried reset and clear, but that did not undo the damage I’ve already done.

NOW, let me point out, the size in Mate Terminal looks good and legible, although I’d still like to know how to increase and decrease the size, but in root terminal, it’s terrible!!!

P.S. another thing I have noticed is both the terminals seem to act different (yes, I know as far as privileges go). I noticed when in Mate terminal, using Ctrl+Shift+C copies text, but that same command does not work in the root terminal. Can anyone point me to keyboard shortcuts for each terminal??? I’m such a noob, I know, but despite all the frustration with linux so far, haha, I’m loving every bit of this huge learning curve. I will never go back to windows!!!

**Thanks for any and all input — I’ve included a screenshot to show the size comparisons of what I’m facing. Please take not of the third terminal window to the very right, that the damage done from pressing Ctrl+Shift++ trying to increase the size FAIL!!!

I am running: Operating System: Parrot GNU/Linux 4.7
Kernel: Linux 5.1.0-parrot1-3t-amd64
Architecture: x86-64
Debian Standard Installation
No multiboot with other systems
No boot issues, or anything like that 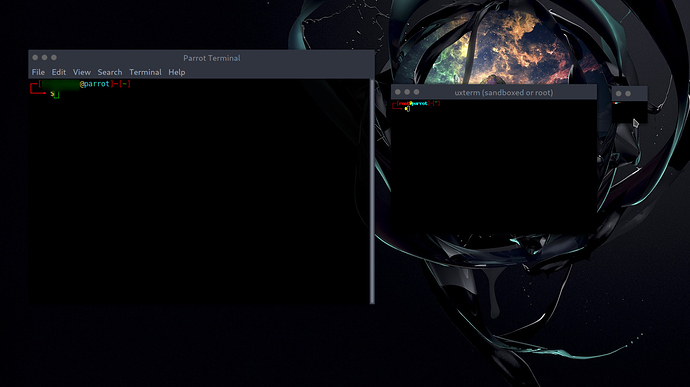 Or alternatively you can press ‘edit’ then ‘profile preferences’ and change the font size manually there.