Briefly describe your issue below:
When attempting to install 4.8, I run into a problem during guided partitioning. The error is as follows:

“the recipe you selected does not contain a separate partition for /boot. This is normally needed to allow you to boot the system when using LVM.”

I would like to do full disk encryption, but this happens even if I choose a regular install. See image for full dialogue:

What version of Parrot are you running? (include version (e.g. 4.6), edition(e.g. Home//KDE/OVA, etc.), and architecture (currently we only support amd64)
Parrot Security 4.8 MATE x64

What method did you use to install Parrot? (Debian Standard / Debian GTK / parrot-experimental)
Standard, also tried GTK and live install

Configured to multiboot with other systems? (yes / no)
Parrot is intended to be the only system on the machine, attempted to install on unformatted SSD

If there are any similar issues or solutions, link to them below:
None that I can find. I promise you guys, I’ve searched a ton for the cause of this problem. I’m assuming I just don’t have enough knowledge to understand what’s happening (but this means I probably don’t know what to search for).

If there are any error messages or relevant logs, post them below:
See above.

THANK YOU very much for looking at my topic, all replies appreciated!!

Did you create a /boot?

Are you using Legacy or UEFI?

For the easiest most full proof installation, select the installation option that does partitioning for you.

Thank you for your response.

That’s the thing that I don’t understand, I am using the guided partitioning option as you suggested, but I still get the error as seen.

This is with UEFI.

Any thoughts? Will I have to manually partition the drive for some reason, and if so, can you recommend a guide for that? (Although I don’t see why there would be a problem with the guided partitioner). Thanks again.

Similar issue, I am getting the same message and if I ignore it and continue the installation I get an error message after restart and cannot boot.

“the recipe you selected does not contain a separate partition for /boot. This is normally needed to allow you to boot the system when using LVM

Thank you for your reply.

I used the “Guided - use entire disk and set up encrypted LVM” option and got that warning, I want to point out that I previously installed parrot OS on this system with the same BIOS setting and using the same option and had no similar problems.

Same problem! Using the same BIOS settings as before (UEFI) the OS cannot be installed with LVM + Full Disk Encryption.

I think that a later ISO build of parrot has issues with LVM.

When i do a guided LVM install i get the same “no /boot, want to continue?” message. And when i do the system obviously could not boot.

Please look into this further, it is not a hardware/bios config error.

It is also tested in a Legacy BIOS Virtual Machine. Guided LVM is not working there properly also.

I hope you guys fix it quickly, i have much love for the OS <3.

I just experienced this same issue trying to install from 4.8 ISO. I was unable to install using Guided LVM partitioning with the same aforementioned message of “the recipe you selected does not contain a separate partition for /boot. This is normally needed to allow you to boot the system when using LVM.”
and then having no options other than to proceed with the error or abort the installation.

I ended up taking the enormously time consuming route of installing 4.7 which does not have the Guided partitioning issue that 4.8 does and spending multiple hours watching the update process from
that point. Almost 4 hours on a laptop that’s about 8 years old (but it runs great when I get through all of that!). The guided partitioning on 4.8 definitely doesn’t work but I feel it’s important to also mention that I have Parrot installed on several computers and I love it!! I’m sure the issue will be resolved in time (hopefully soon)…btw I should also mention I am using Parrot Security 4.8 MATE.

Any updates on the fix?

did you try manual method?

I’m having the same issue with the KDE version as well. In the same Setup Encrypted LVM guided partition.

@bryceton, can you be more descriptive with how you did the work around? Are you referring to separate partitioning for /home vs the all in one partition option?

Hey since you guys aren’t going to correct the guided encrypted partitioning, I’m gonna go use Kali Linux and let my friends know if they use Parrot 4.8 they’ll have to waste their time manually creating partitions to set up encrypted volumes, so they should just use Kali too. The whole point of the “Guided partitioning” is so you don’t have to partition manually. So long and thanks for all the fish! 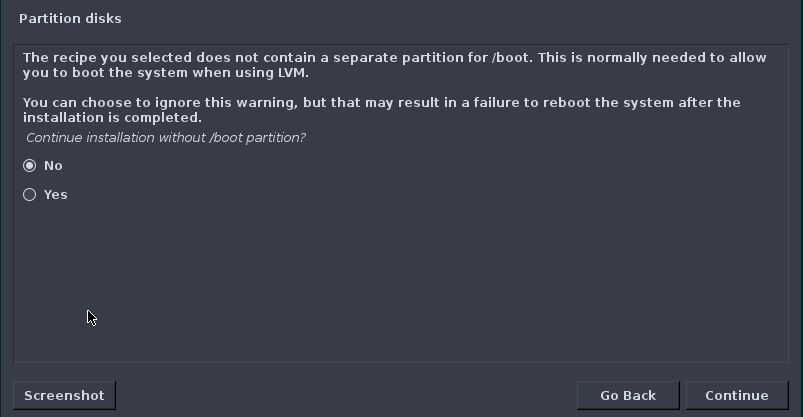 Where do you get that shit?

Any updates on the fix?

Beta 3 is out. We are dealing with not only this problem but libudev and other shits.

I’m having the same issue with the KDE version as well. In the same Setup Encrypted LVM guided partition.

It is a bug in the installer. KDE or Mate doesn’t matter.

Hello! I had the same issue in a Dell Latitude 7390 in UEFI mode. Seems like an issue with the installer itself. You can either partition manually, use 4.7 instead (what I’m doing as we speak, didn’t get the message) or wait until 4.9 goes live! (should be soon, beta is already available).

Yes it is. It should be fixed in next release. We also ship the calamares installer in live mode which is awesome and it supports full disk encryption without boot partition. It also encrypt the boot partition too.