Unable to connect to WPA2-E PEAP

I am having an issue connecting to WPA2-Enterprise with PEAP and MSCHEAPv2 authentication. We are using no certificate and using domain credentials.

I manually added the entry system-ca-cert=false to /etc/NetworkManager/system-connections/SSID.nmconnection under [802-1x]

I even tried the suggested and installed wpasupplicant 2.4 per Unable to connect to PEAP MSCHAPv2 WIFI

I am really at lost. Maybe I did something wrong. I will appreciate any suggestions.

What version of Parrot are you running? (include version, edition, and architecture)
Linux parrot 4.18.0-parrot20-amd64 #1 SMP Debian 4.18.20-2parrot20 (2018-12-10) x86_64 GNU/Linux
What method did you use to install Parrot? (Debian Standard / Debian GTK / parrot-experimental)
Standard
Configured to multiboot with other systems? (yes / no)
no
If there are any similar issues or solutions, link to them below:
n/a
If there are any error messages or relevant logs, post them below:
https://pastebin.com/pbsXtk2S
https://pastebin.com/ZVTLtTMs

from the provided output:

you have definitly another issue
what kind of radius or 802.1x system do you use?

certifcate expired? do you use old ssl version? 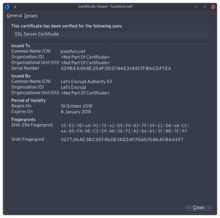 Transport Layer Security (TLS), and its now-deprecated predecessor, Secure Sockets Layer (SSL), are cryptographic protocols designed to provide communications security over a computer network. Several versions of the protocols find widespread use in applications such as web browsing, email, instant messaging, and voice over IP (VoIP). Websites can use TLS to secure all communications between their servers and web browsers. The TLS protocol aims primarily to provide privacy and data integrity bet...

We have Ubiquiti APs that authenticate with our AD server. I checked on the authenticating server logs and noticed it says credentials coming from my computer are invalid. I know the user and password are correct in the nmconnection folder.

I asked put in the setting asking it to ignore certicate but is that still a problem? I am not sure about the SSL version at this time.

have you tried looking for that message in your log??
it is within same second as your association starts - guess what?

I see the same errors. I followed their example and added the following 2 lines to /etc/ssl/openssl.cnf, still without success:
MinProtocol = TLSv1.0
CipherString = DEFAULT@SECLEVEL=1

The one thing I haven’t done is downgrading OpenSSL. Unless I missed something else.