which linux os to choose in VMware?

i choose as Guest OS: “Debian GNU/Linux 19 (64 bit)” and currently with “Other 4.x or later Linux (64-bit)” and vmware puts out this message for both respectively:

The configured guest OS (Other 4.x or later Linux (64-bit)) for this virtual machine does not match the guest that is currently running (Linux 5.9.0-2parrot1-amd64 Parrot GNU/Linux 4.10). You should specify the correct guest OS to allow for guest-specific optimizations.

The configured guest OS (Debian GNU/Linux 19 (64 bit)) for this virtual machine does not match the guest that is currently running (Linux 5.9.0-2parrot1-amd64 Parrot GNU/Linux 4.10). You should specify the correct guest OS to allow for guest-specific optimizations.

i haven’t tried “Other Linux (64 bit)” but before i do anyone know the correct Guest OS one needs to choose for Parrot 4.10’s rolling distro?

I own VMware 14 Workstation, which is older than 15 or the newer 16. But this setting works fine for me. 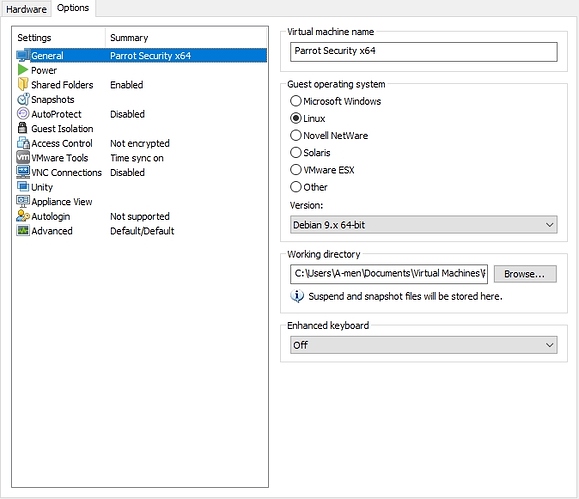 i had used Debian 10 (64 bit) on VMware Workstation 15 and that worked without a warning msg so i used that setting on VMware ESXi and would get that warning msg along with the other setting i tried.

i tried your suggestion of Debian 9 (64 bit) today on ESXi vm and no warning msg’s. cool.

thanks for the help!

edit: spoke too soon. ESXi is displaying the same warning message for this choice too. guess it took a few minutes before that would show. i’ll post over at vmware too and get some feed back.

Parrot is using Debian testing and latest version is using 5.x version of kernel. I’d suggest you use virtualbox which likely supports more than vmware (at least you can see the debian 10 in the list as far as i remember)

thanks for reply and apologies for my late reply…

no more incorrect guest os messages. beats me exactly why this worked but no more of those messages, for now.