After running ‘sudo parrot-upgrade’, not only lightdm-gtk-greeter fail to load, but if I install lxdm, or even try a ‘startx’, all results in a black screen with a white underscore on the top left corner. This is the second time this has happend in two days.

What version of Parrot are you running? (include version, edition, and architecture) 4.6 updated from a 4.5-1 security install.

What method did you use to install Parrot? (Debian Standard / Debian GTK / parrot-experimental) Debian GTK

Configured to multiboot with other systems? (yes / no) no

I created an image with my error, my system specs, and my kernel. I found that by adding, ‘nomodeset’ on the Grub edit menu results in the system booting, thus leading me to believe it may be a kernel or video module error. 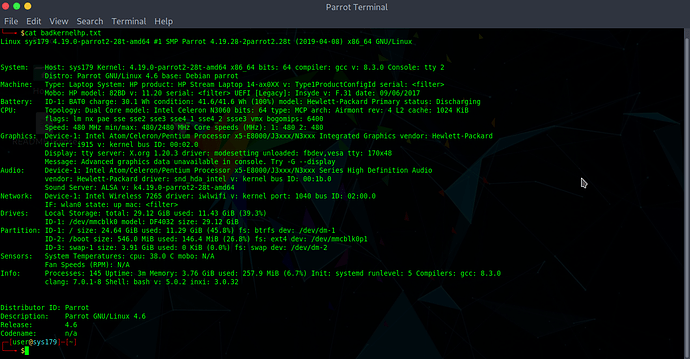 No that’s normal, and yes it is a video driver issue. Probably nvidia related but there’s almost a dozen or so I think that get installed by default with those parameters that don’t work for your machine. You’ve found the fix though…

I’m afraid not, unless you’re seeing something I’m not.

While adding ‘nomodeset’ works to get the system to work graphically, it also makes the graphics too large and sometimes unusable. Everything was working fine until this kernel upgrade. It says I’m using driver i915, but I thought I was using that driver before. Could it be an updated driver that is causing the issue?