New Install then Upgrade. No sound at all

Hi Bill. What is your output for

Oops, sorry about the delay. What do you get when you run 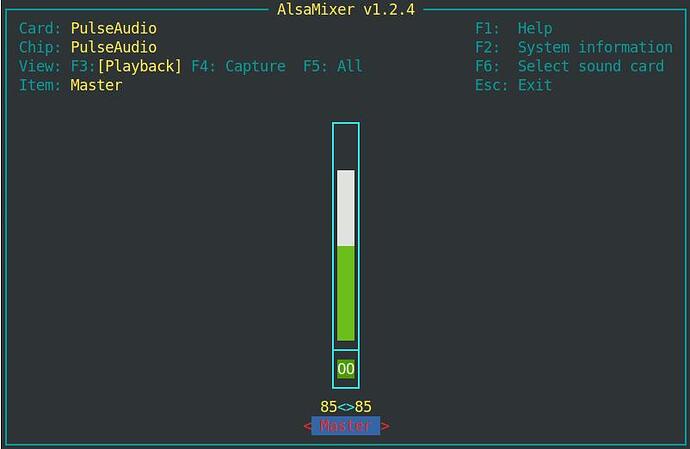 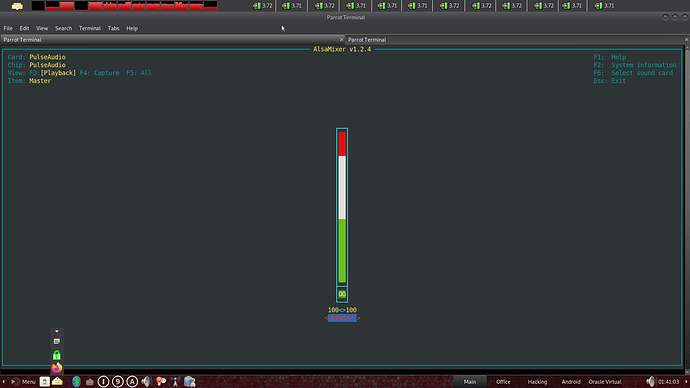 Have you tried F6 while in alsamixer to choose a different sound card?

Yes I did but it changes nothing. I have some weird stuff going on right now and I need some help but and it’s not my sound. Where should I post my question. Unless I can correspond with you securely and not
In public?

I will close this post. After trying to fix this I have abandon the device I was using. But my efforts may have been in vain because I found when I would boot into windows I had no sound either and it shows I don’t have a sound card at all. Thanks for your valuable time. I know mines valuable as well

I’m sorry I don’t know how to close this

Anyone having sound issues with an Asus laptop might want to read this. I had an Asus fx505dg TUF gamer. Sound was fine. I deleted win10 and installed Parrot-Sec as a single boot system. Sound issues started almost immediately. After multiple vain attempts to get sound I decided to look at my Bios to see if I might find an answer there. My bios seemed corrupted. I could access it but i couldn’t make any changes except to install or removed Admin and power up passwords and i could hit save. That’s it nothing else. I tried for several weeks to update my bios but it wasn’t working. It appeared the machine was ready to be parted out. So I shelved the laptop and went to an Asus FX705. i did the same process on this one and guess what ?? The bios was doing exactly what the FX505 was doing. Logic would say that this has something to do with me uninstalling win10? Thank God Microsoft uses that little hidden partition so it makes it very easy to reinstall windows with out a new subscription key. I reinstalled windows 10, added Parrot-Sec as a duels boot and PROBLEMS SOLVED. Now I did the same with the the 505 and Bios works again and I have full sound. My guess is that Asus has some type of lockout utility if the original OS gets erased? I don’t know and I could find absolutely nothing to explain this behavior online, including on Microsoft’s and Asus web sites. So this is only theory at this time, but I think I can state that the evidence supports my theory and everyone needs to know about this so you don’t trash a perfectly good machine like I was about to. I starred learning Linux 9 months ago. I installed Parrot sec in my second month. I have installed so many Linux OS’s on several dozen different laptops, I have broke handfuls of OS installs, When I first started I would go to close my browser down at end of day and I’d have 40 to 60 tabs open on various browsers. Today the actual OS’s I have installed on all different hardware are all stable (except one old Macbook pro :{( but I’ll figure it out. ) I only have a few tabs open at end of day , although every once in awhile I’ll have several dozen as I learn new techniques and tactics. I am actively recruiting a young generation to teach them Linux as well as to tech them how to get into network security and ethical hacking. I have 5 servers up and running , they’re all old ,and I have had my tabs open on those fukerz. Anyway since my servers need only a few more modifications , like updates-grades, I have only had time to start learning some of the hacking tools that are available in this outstanding OS. I have a hard time asking for help. It might be easier to ask for help, but I earn more by trial and error. And I don’t make the same mistakes over and over. Anyway. I have 2 HP Proliant servers, an , a DL360 g5 and a dl380 gen8. and I have a a Dell ML330g7. I have 2 new quad core processors for my 360G5 but my reading indicates I need to upgrade the BIOS. I know this question is out of place but if anyone knows how to upgrade these old servers firmware and the important ILO ports that each server has. Your input would be helpful valuable information for me. I know this is a Parrot Sec site and I know no ones time is more or less important then mine. But I am like | | this close to being able to start learning Burp Suite and all the other Parrot sec tools. My goal is to get a team training and to start a Home network network security business in my town. I know the big bucks are in the Corporate environment, but I have several ideas to keep a steady income from all my customers. I am this close to breaking outta this Linux torture chamber I’ve lived in the last 9 months and to be able t start using Parrot Sec to generate an income. I am committed to this. I am 55 years old and if anyone can help or point me in the right direction. I’D BE EXCEEDINGLY GRATEFUL FOR YOUR INPUT ON THIS. PS I WILL BE RUNNING AT LEAST 2 PARROT SEC VM’S INSIDE MY SERVERS of which I am running Proxmox on all my severs

PS , I’m just gonna throw this out there,but our Sheriff’s Department has a whole fleet of drones in the sky at night where I live, These are not $ 1000 drones these are hundreds of thousands worth of them. 2 are the size of my car. Full facial recognition technology, full heat signature infrared, Imsy or Stingray devices are also on board. They follow our homeless population around at night and now they follow me around at night, cause i drive for Uber . These Gog damned machines are spying on the citizens of my city. Even thought I have friends that are affiliated with biker groups , I guarantee they don’t have any warrants to keep me or anyone of the homeless under surveillance. So I am asking if anyone has suggestions , or what would you do if this were happening to you. These things have also performed MTM attacks against my key fob door locks. I think they must run an OS with some hacking tools? Every hacking tool I tried to learn at the beginning was used AGAINST me . In fact I think most of my struggles in the beginning were due to outside influence , I think they had my home or electronics bugged and when I would practice a tool then they would perform that attack against me. It just too damned much of a accident that tools I practiced were used against me? I didn’t attack my self , except my WiFi a few times just looking for passwords. Anyone think I should jam their signals and have a lawyer with me when they show up to recover their drones? These things are pissing me off and I’m not like other people . When things aren’t right, I am not the guy that just sits around and hopes someone else fixes it, I’ll have our sheriff replaced soon enough if he doesn’t get rid of theses things from my home and stop following homeless people around. I AM AN AMERICAN CITIZEN AND I HAVE THE RIGHT TO NOT BE SUBJECTED TO Illegal government surveillance . I need advice from people in the security industry. Thanks for letting me ramble on. One day those drones will be used against American, and other countries , citizens. WE MUST SLOW THIS DOWN!!! ADVICE FROM ANYONE?