Hello there! Thanks for helping us test the first beta image of Parrot 5.0. Thanks to you we found and resolved many bugs, and in relation to this, we ask you again to test the system in its entirety, and to leave a report in the comments of this thread.
DOWNLOAD LINK HERE: Parrot 5.0 Beta 2

I try to install, this beta and the before but I couldn’t, same error. Am I doing something wrong? 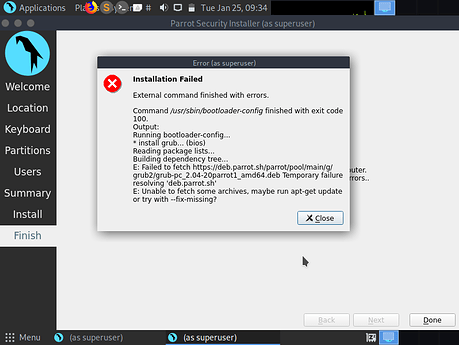 I don’t know why “parrot” is asking for beta testers, when this release is a real disaster and the previous releases also doesn’t work. I guess I have a pretty good experience on Linux multi systems, but I never saw so many troubles on any release before. I have had on time, 16 different releases + win Xp on a single laptop, and nowadays I have all of my systems with dual boot, and some of them with triple boot systems. The previous release was absolutely useless, … just for test it and run it from USB or DVD. “Calamares” doesn’t work, and configuring manually to install beside Win 7, also doesn’t do nothing, … than impossible to install it on different systems, … doesn’t matter what type of platform. Simply, it doesn’t run after the command “install” … not freezing, but just get in “stand by”. I would desire to replace “kali”, which is working beside “win7/10” or “winXp” & “Mint” but not, no way to install. If some time in the future will work, please advise! Thanks!
After this message I will unsubscribe for any emails from “parrot”.

Same error as I posted for Beta 1. 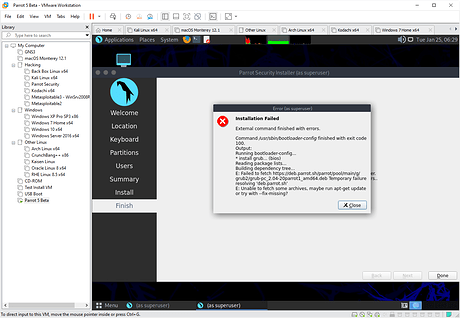 I tried booting off the ISO again, went into advanced mode console, and tried the following (unsuccessfully): 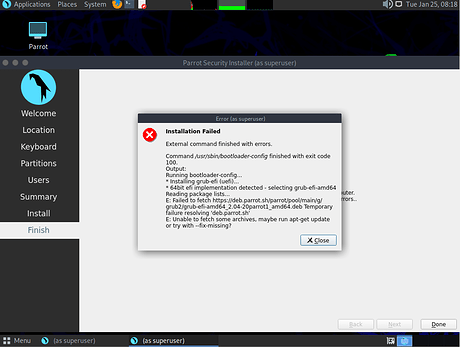 I wish from parrot os the good team 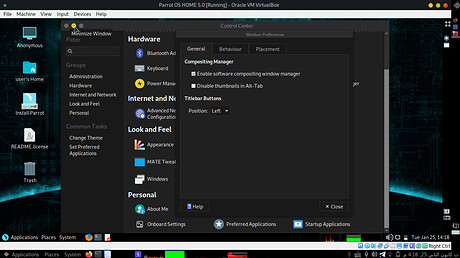 Will try beta 2 within the next 1-2 days but thanks to the Parrot team for all your efforts and the great system!

I don’t know why “parrot” is asking for beta testers.

Thank you for your time crying here. It is called “beta” so it needs beta testers.

What if you try something like start resolvconfig in chroot and then run grub-install?

Parrot OS is open-source and calls for testers to test it freely which is totally awesome. As Parrot project exists, developers like me get a golden opportunity to contribute to such a sophisticated OS from ground-up .

There are other “Paid OSs” or namely open-source but require paid training to get up - you better switch to those ones.

were you able to install it?

How long until the arm version is available? Keen to test in Parallels on an M1

Woow, … very important info, … that’s beta! … Do you think we are stupid? Why don’t you read the rest of message? How can somebody testing the previous release, if can’t be installed? Definitely, no way with an indecent release! Maybe someday in the future! Good luck!

Beta testing is an important stuff before the actual release. I hope you can imagine what will happen if we release our OS without any test. Also, external testing method is so accurate than testing by developers itself. I hope you understand

I try to install, this beta and the before but I couldn’t, same error. Am I doing something wrong?

hi, you are doing it right,and one of the things we have to fix is the selection and installation of the proper grub package. they can’t coexist on the system, and we can only provide one of the 3 (bios, efi32 efi64). if the system needs another one, then the installer needs to install the package from the local apt mirror shipped with the installer itself. unfortunately it does not seem to work, and the installation is attempted from the internet where it fails.

we are waiting for someone to find a solution and patch the calamares config before we do. that would help offloading our dev team

these commands are wrong, and none of them should be able to fix the issue, neither if run on your host, nor if run in the target chroot

I don’t know why “parrot” is asking for beta testers

as you can guess from our recent social media activities, we have been working on a new major release, which introduces significant changes to our system architecture. we need expert people from our community to help us find the bugs (some of them are pretty obvious, especially when the installer or the boot process are involved), and especially to find smart solutions to such bugs.
workarounds are welcome, but actual fixes are what we, the parrot team, really need help with if we want to deliver this new release as soon as possible.

they are called beta images because they are broken, experimental and need to be tested. the fact that the biggest bugs involve the installer is the absolute evidence that these images are in beta and they need community contribution to be released faster

you probably don’t know what open source is, how it works and why we are here, could you please help me figure out why the hell are you participating in this beta testing program if you have no clue of what to do?

I guess I have a pretty good experience on Linux multi systems, but I never saw so many troubles on any release before

don’t worry, no one is perfect, and we all have guessed wrong at least once. first of all, and it is very important, you have to be able to recognise a release from experimental pre-release artifacts, otherwise you fail at being fair

go to parrotsec.org, click on the download button, download parrot 4.11.3, put it on a usb drive with a tool like etcher.io as advised by our official documentation and install it on your system. you will be able to upgrade to parrot 5.0 as soon as it becomes stable and gets released

i have absolutely no idea why you are here

Same error as I posted for Beta 1.

ok thank you, i believed we had fixed it already, but the repo config is handled differently in this release. i will look into that again (i have an idea)

good to know, i needed that output too. so the ia32 implementation ended up being the default one on the system, and the installer is properly selecting the grub release. it just fails to install the package. it points me in the right direction

what is wrong with the default layout? do you prefer to have close:minimize:maximize rather than close:maximize:minimize? it is doable but it is mostly a matter of taste. will take it into account

what does your wireless network card look like? systemd uses a new predictive naming scheme. it is ugly as fuck but it is there for a reason. we used to have specific patches to restore the old school unix names, but we wanted to be more similar to what the industry is doing nowadays. i will take in consideration continuing to adopt the legacy name style

never heard of that. it is not part of debian and it would require extra work to package and maintain it over time. we will probably not do that by now

the seclists package requires a huge amount of storage space: it requires 1.5gb of disk space, so we will not consider adding it to the distro by default. you can instead install it from our repo at any time if you needed that. even if it uses 1.5gb of storage, it only requires 400mb to be downloaded, so it is cheaper to you to download than for us to provide by default

it would imply developing too many editions, shipping too many iso files and make our offering extremely confusionary.
instead we are adopting a new idea, by only providing the mate edition as a live image, and then shipping also an architect edition where users can pick whatever DE or set of tools they want. with the architect edition you will be able to install parrot security xfce with seclists.

What if you try something like start resolvconfig in chroot and then run grub-install?

resolvconf was my idea too, but it does not pick the dhcp address if dhcp was performed while resolvconf was down, so you need to run resolvconf AND run dhclient again OR manually put “nameserver 9.9.9.9” in /etc/resolv.conf just for this time. but it is a workaround, not a solution. the installer has to work completely offline

Parrot OS is open-source and calls for testers to test it freely which is totally awesome. As Parrot project exists, developers like me get a golden opportunity to contribute to such a sophisticated OS from ground-up .

There are other “Paid OSs” or namely open-source but require paid training to get up - you better switch to those ones.

this gave me a little hope in humanity again

How long until the arm version is available? Keen to test in Parallels on an M1

@danterolle and @kyb3rcipher were able to develop a new arm builder that proved to work on raspberry, and is easy to be ported to other boards. meanwhile i have prepared the iso builder to be compatible with arm64 live images for mac M1 as well, but it requires an arm host to build it (working on it) while the architect iso should be able to include arm64 packages with no further effort. this is game changing for us.

Woow, … very important info, … that’s beta! … Do you think we are stupid? Why don’t you read the rest of message? How can somebody testing the previous release, if can’t be installed? Definitely, no way with an indecent release! Maybe someday in the future! Good luck!

i was able to test both beta1 and beta2 by installing them successfully by doing the bootloader installation separately. other developers and community members did the same and were able to report other bugs. having this beta image online was also essential for us to have our devs and community members work on a solution to the installer bug (how should they fix the installation if there is no installer to use?)

you still continue to confuse a beta image with a release image, so i want to say it clearly as a director of the project:

p.s.
it is not an incident: releasing broken images as beta images during the last stages collaborative development of a commmunity product is a best practice, and all the properly developed open source products do that

Beside that: Is there a changelog for the beta version? It would be interesting to see what has changed.

Sadly, I don’t have time now and until next month. But, I hope I can test the beta soon or in some of the next rounds.