Hey everyobody,
I tried to install parrot security on my ACER Aspire ES 15 model ES1-533-P205 this is after Debian 9 installed & was working fine for 2 months & parrotsec works fine in live mode as well. So I checked that the md5 signatures match & the do.

During install I tried 2 approaches:

version: Parrot-security-4.5.1_amd64 (I chose this version because I want to eventually become a white hat hacker even though this will be on my personal laptop)

What method did you use to install Parrot?
live usb

Configured to multiboot with other systems?
yes with windows 10

If there are any similar issues or solutions, link to them below:
none

If there are any error messages or relevant logs, post them below:
Warning: there is no swap partition or If I make one then I get the following error “steps that failed: configuring the package manager”

Thanks for your time
AP

It will do Everything fine for you

I’m sorry I didn’t explain properly. Before every attempt I delete all the linux partitions and proceed from there

Then I think in installation also you able but

Hey Amzker,
I thought that Gparted is used by the installer in the partitioning step; or does the installer use KDE Partition Manager? Do you mean that I should start Gparted that comes with Parrotsec outside the installer?

please tell me that that you didn’t mean to say, “Use the recommended setting/arrangement/steps in the proceedure with the liveUSB installer” as I think I was very clear that that’s what I already attempted many times

I am talking about auto partition

attempt I delete all the linux partitions and proceed from there

NOTE: This issue maybe because not perfect created bootable USB (2)

Thank you for clarifying but just a few more questions:

latest version of rufus is that not just as good as etcher?

Rufus is Good , but

And best way is DVD [No issue You get]

I can’t use etcher here’s what it looks like when I try to browse for the parrot image file: 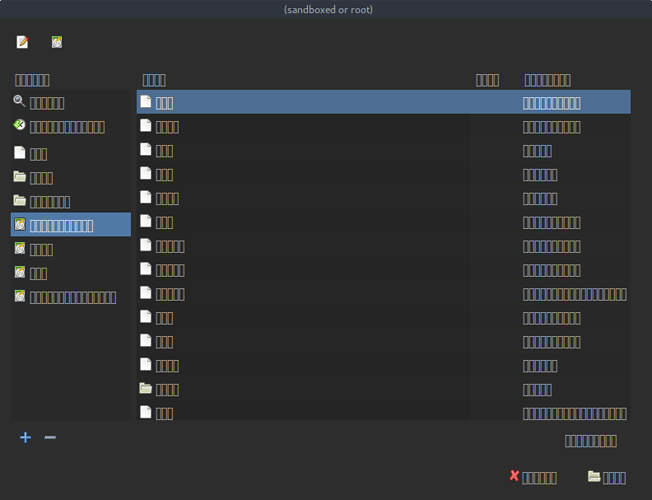 This one is not etcher
Wait i sends

ok thanks
I took it from wget https://resin-production-downloads.s3.amazonaws.com/etcher/1.0.0-beta.6/Etcher-linux-x64.AppImage because I’m in parrotsec liveUSB right now

So I tried everything you said to do

Now here is not your any fault,

I will download and check that ISO And check

, & install with this steps

lse. The failing step is: Configure the package manage

The failing step is: Configure the package manage

Hell yeah i forget. Cam you give install.logs at
ALT+F7
Or ALT +F4

Try grabbing the 4.6 release(it’s stable enough), 4.5.1 is about three or four updates behind at this point. Also when you make changes with live usb you should reboot before starting the installer again

Haha, my bad I thought we were on 4.6…you can disregard that part but if you want the testing in the archive

I was thinking a newer version might help because package management can be affected by time/date/release synchronization oddities…but that’s not actually an issue here I suppose. Now on to what I meant was that if when you’re setting up partitioning in the live mode for an installation after you make changes to the partitioning(ex. preformating one large partition, erasing all the volumes you want to get rid of, resizing windows, etc.) that you should reboot after doing that before booting into the installer. However as I understand it you have performed a successfull installation if so I guess you can disregard that as well…
If you are still runnign into trouble with configuring package manager you can try erasing all the data on the disk space you want to install in as opposed to just delete the previous partitions, try connecting an ethernet cable to the machine during installation so it can go online beyond that you may just have to keep trying sometimes it’s really hit or miss.
Oh and I don’t know of a way to start the os without rebooting after install either, doesn’t sound like a good idea either

So I tried version 4.5. Etcher completes & sats that it failed. Upon investigation the .torrent doesn’t match it’s md5 signature. I tried 3 different torrent files & they all have the sigatures between them but none match the published signatures.

Now i not undetstand what’s going on

I haven’t tried to install this one after getting it from bittorent because etcher gives the above error after completing the liveUSB (ie etcher completes the write but tries to verify that it is written properly by checking the checksum & the result is they don’t match) This is probably because the .torrent file’s checksum didn’t match.

So should I be worried or should I just try to install it anyway?