I have looked everywhere for the password to use with Parrot OS and all of them have not worked. I have tried toor, parrot, user, root and none of them have worked.

I’m running Parrot of a USB and have not installed it on my hard drive as I just want to use it via the pendrive. I’m a bit of a Linux noob so I apologize for not knowing much.

Any help would be appreciated.

I use sudo su or sudo -i in live usb.

Use the password you have already created for the users.

Only with
su
and type your password
will be enough

he said he uses live so he did not create users, and the default passwords does not work
this problem has already been reported but without answers it seems Persistence Passwords and Permissions

This is how I fixed it.

you can create a password for root in this way. 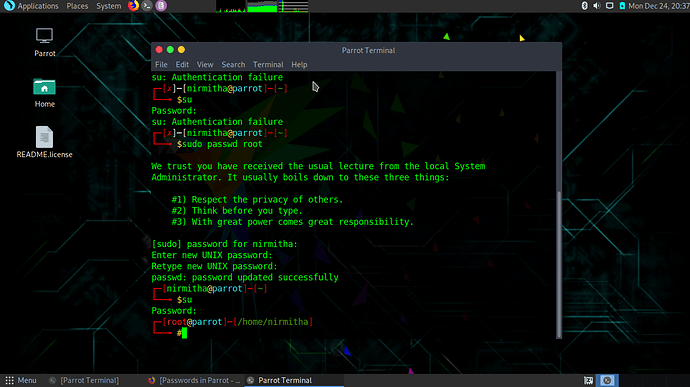 I dont believe these are actually related believe it or not. For a brief time (i thought it was during 4.2-4.3 ish era?) we had a bug where the password for the root would change or lock out and apparmor prevented lots of ways to fix it. Im still not sure why that happened but I think the general consensus was the commonality of users logging in as root (you never ever ever need to do this, root is not who you are or need to really be. its there to prevent you from leaving the metaphorical door unlocked for anyone to walk in and gain access where they shouldn’t). are you selecting live or persistence? @s1udge gave the correct live method but like he said it is not persistent and many of the users that use USB want to not start from scratch all the time, I am indeed trying my best with my other workload to compile a solid listing of what needs to be straight up deleted, what needs updated and what still applies/needs tweaked or combined in some way with the docs that we have so far; Unfortunately I broke my phone screen pretty bad and had to replace the device without being able to disable my 2fa for not only parrot but most other accounts and my backup photos were not able to decrypt on my replacement so I am extremely far behind my schedule I had been aiming for with the rewrite. I still really could use help compiling this list and ideally from someone who does not have a custom built computer like I do; there are certainly many more variables I go through to troubleshoot than sanity calls for with a testing system like Parrot so it would help a lot but regardless it is still an active priority on my task list.